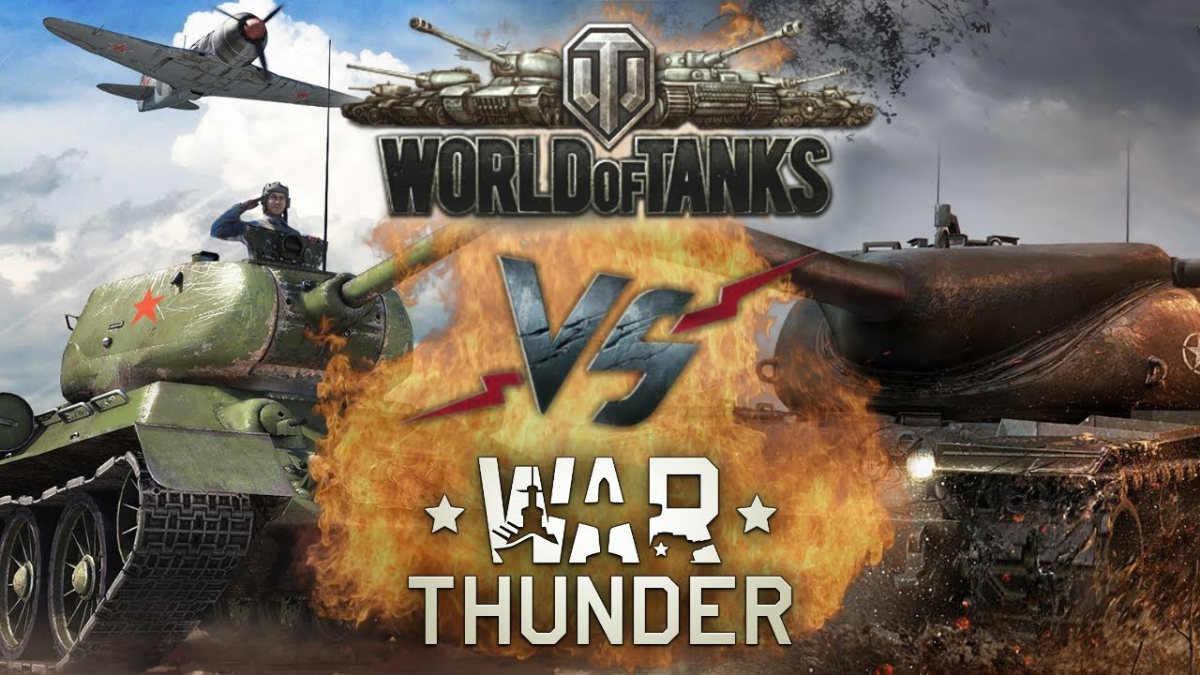 Essentially, while both games feature combat warfare, they are very different in their approaches. War Thunder is a much more realistic simulation of vehicular warfare within reason. Meanwhile, World of Tanks is a more arcade shooter experience and a form of MOBA with tanks.

To give you a clearer idea of this difference, tanks in War Thunder move much slower than in World of Tanks. At times this can be overwhelming for tank players as the maps in WT are designed with airplanes in mind. In its effort to provide a realistic depiction of vehicular warfare, War Thunder has to keep tanks closer to their “real” speed.

So you may find yourself moving around the map like a slug while being exposed to aerial attacks. At the same time, this decision is one of the reasons War Thunder has more strategic depth.

On the other hand, World of Tanks provides a more fast-paced experience.

The damage model is another area where the two games differ, and War Thunder takes a more realistic avenue. To immobilize a tank in War Thunder, you have to take down its crew or critical mechanical components.

On the other hand, World of Tanks follows a simpler HP reduction system. To destroy a tank, you have to reduce its HP to zero. I will try to make an analogy with two other competitive games here. In a way, World of Tanks is more like League of Legends, while War Thunder is more like Rainbow Six: Siege.

With the notable distinction that War Thunder and World of Tanks utilize the same style of warfare, of course. So, in a sense, they are both great tank games for what they are.

Read also: The Best Tanks in World of Tanks

The aiming system differences are fascinating and indicate the vast differences in playstyle between the two tank battle games. When thinking about tank fights, most people have in mind that you will try to strike from a distance to take down an enemy tank.

That’s War Thunder for you. As tanks come with limited mobility in WT, you will have to be very careful in positioning.

Your goal will be to snipe down the enemy ground forces from afar. In that regard, the aiming system in War Thunder is exactly what you would expect, although not necessarily in terms of realism.

The physics mechanics will take gravity and velocity into account, and you can expect artillery shots to land where you want them to. But for that, you will have to take distance into account and the vertical dropoff.

On the contrary, regardless of whether you use a top-tier premium tank or a bottom-tier tank in World of Tanks, you will not find the same level of realism. The game forces you to engage in Close-Quarter-Combat with the enemy as everything is about timing and enemy speed.

The mobile version of WoT, World of Tanks Blitz, takes this to the next level as precision and reflexes are even more toned down. What matters in the mobile version are tactics, map and lane knowledge, and team coordination.

Again, all this is a testament to the arcade mode aspect of World of Tanks. At this point, you may feel the urge to play both MMOs to experience.

One of the biggest differences between the two games is the available vehicles, which directly affect gameplay. First of all, War Thunder started as a flight combat simulator and eventually introduced tanks with a later patch to mix things up.

As we mentioned before, the maps are designed with airplane warfare in mind, too, which offers a very different experience. There are more than 2,000 highly detailed aircraft, helicopters, tanks, warships, and other combat vehicles in War Thunder crafted carefully from historical documents and surviving sources.

You will also experience 100 maps representing historical battle locations. The historical accuracy of the tanks and planes is on point in War Thunder, even if sometimes the gameplay is not.

Contrary, World of Tanks has been about tanks from day one. WoT features more than 200 tanks from America, Britain, France, Japan, China, and the USSR. Almost all of the vehicles in this game are historical.

Even though some tank models did not make some of them into final designs, they remain historically significant designs.

It’s tough to decide a clear winner here as both games provide great historical materials, and war game lovers will enjoy their accuracy.

War Thunder VS World of Tanks: Graphics and Physics Differences

Both games feature fantastic graphics. WoT has the edge in providing a more immersive experience in terms of landscape, sky visual effects, and interaction with the environment.

I don’t believe that you will get disappointed with either game as the graphics keep getting better with each update.

War Thunder's edge is the display of damage visual effects; this is closely related to the damage model and armor penetration each game features.

Since you have to damage individual components in War Thunder, you will also see the damage visual effects that indicate that you hit the right spot, such as a fuel tank.

Firstly, both games belong to the free-to-play segment (F2P). Paid content is being offered to cover development costs.

Collecting gaming points, or purchasing them, is the key to getting upgrades. Then, players can obtain stronger tanks, upgrade their modules, crew, etc.

World of Tanks has the edge here, although War Thunder tries to close the gap.  You will find many more mods in WoT, including visualization mods, textures, and functionality mods.

My understanding is that World of Tanks has a clear advantage here. War Thunder has more Steam players, but Wargaming does not rely on Steam distribution as much. While War Thunder players seem to be around 20,000 thousand per day, based on WoT news, World of Tanks boasts more than 1,000,000 active players weekly in all regions combined.

To conclude our World of Tanks vs War Thunder comparison, the two games target somewhat different audiences, so I don't believe there is a clear answer to which one you should play. World of Tanks has a larger player base, with all the advantages and disadvantages it comes.

One thing that seems to have put War Thunder players is the extremely grindy nature of the game after the introduction of tanks. This might push some of you away.