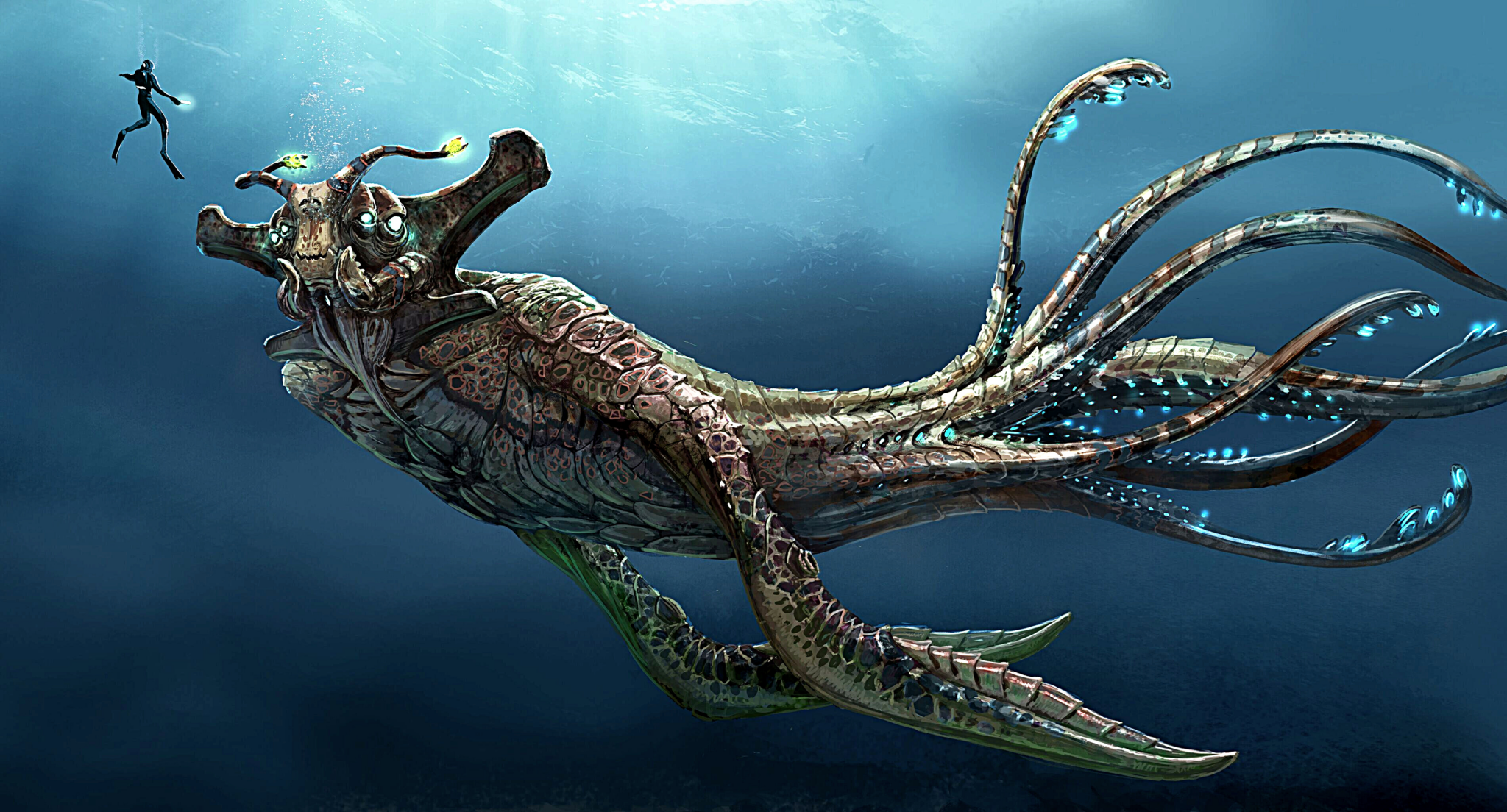 In this post, you will find everything you need to know about Leviathans in Subnautica, including their sizes, locations, and physical characteristics. Subnautica and Subnautica: Below Zero pit players against the hazards of planet 4546B in a water-based survival game. Due to its unique elements and story, the game has gained worldwide fame and admiration offering players a magnificent experience through the landscapes and waters of 4546B. Subnautica is amazing in every aspect, but by far the most impressive aspect is its creatures.

One thing that stands out above the rest in Subnautica is its Leviathan class organisms as it features gigantic and awe-inspiring creatures.

The Ancient Skeleton is one of the few extinct creatures on planet 4546B with one discovered fossil of it that is estimated to be 1,000,000 years old. The plated skeleton of the armored Leviathan features three eyes on either side of its head and was of great interest to the Precursors as they set up a laboratory to investigate the creature. However, the player does not know why it was being studied. Despite this, it is possibly one of the biggest creatures to have ever existed on planet 4546B.

Even the Leviathan's teeth are larger than the player and it is even possible to swim through its fossil.

Ancient Skelton looks like a gigantic eel, so while the skeleton's length is around 95 meters or 285 feet, its overall size is probably much larger.

The Chelicerate is the smallest aggressive Leviathan on planet 4546B. Its body is red and around 40 meters or 120 feet long. This section of the jaw is made up of four long, curved mandibles pointing forward that mesh together towards the back to form an inescapable jaw. Between the mandibles is a small beak-like mouth with two rows of forward-swept teeth. Its body is covered by a red exoskeleton that consists of smaller and smaller plates towards the creature's tail.

There is also an en even larger version of Chelicerate in the Void biome that prefers to swim in dark, open waters. You want to avoid encountering this Leviathan as it is aggressive and potentially lethal.

Frozen Leviathans are extinct creatures with only one body of a deceased discovered at the Phi Excavation site on 4546B. The species of the frozen creature is unknown but it seems that it became extinct approximately 1,000 years ago. The body was discovered by Fred Lachance but despite an intensive study by Alterra, not much is known about the Frozen Leviathan.

The skull itself is located in the Bone Fields, while its ribs can be found at the entrance of the Lost River Junction, and a smaller but otherwise identical skull can be found in the Ghost Forest.

The Precursors showed great interest in this fossil too as the remains of a lab set up can be found around it. The larger of the two skulls is so big that even a Cyclops can fit between its jaws.

The Ghost Leviathan is often considered one of the most terrifying Leviathans and is the second-largest aggressive Leviathan in Subnautica behind Sea Dragon Leviathan. Three Ghost Leviathans can be found in the Grand Reef, the first one spawning once the player enters the Crater Edge, while the next two spawn with 30-second intervals if the player stays in the area. The Leviathans will chase the player until killed or until you return to the playable area.

The Glow Whale is the smallest Leviathan in Subnautica: Below Zero Leviathan standing at 30 meters or 90 feet long. It is one of the most impressive creatures in planet 4546B and one of the non-aggressive Leviathans.

These majestic creatures will allow players to pet them or even ride on their backs temporarily.

The Glow Whales massive body even supports barnacles and vegetation. Despite this compared to other Leviathans the Glow Whale is lackluster in size.

Ice Worms are the eighth largest Leviathans in Subnautica: Below Zero and the largest aggressive Leviathans in the game. This Leviathan Class Organism is the only one that you will find on land. The head is mainly comprised of a single huge plate that tapers into a long, thick horn sticking straight out from the head. This horn is super-heated and allows the Ice Worm to melt through ice in order to burrow and resurface once it feels vibrations on the ice and attacks its prey.

The top side of its body is covered by a thick exoskeleton, while the bottom part is unprotected. It is impossible to kill an Ice Worm, as it does not have a hitbox. It is also impossible to scan a living Ice Worm. Scanning the Ice Worm carcass in the Arctic Spires is the only way to obtain its databank entry.

Reaper Leviathans are aggressive Leviathan Class Organism that usually inhabit large open areas such as the crash zone, dunes, and mountains. It is the third-largest aggressive creature in the game and the fifth largest overall.

Reaper Leviathan roars loudly and echoes from great distances. This roar is a form of echolocation, according to the databank entry, but it does not function like this in the game. Also, it circles its prey (or more commonly the player) for a few moments before attacking, often from behind.

Leviathans usually swim in deeper waters, but not as deep as the seafloor level. Players can avoid detection by swimming on the surface. If they use a Seaglide instead of a submersible, it is less likely to notice them.

Immediately after being injured, the Reaper Leviathan will flinch and roar. They will not respawn.

Reefback Leviathan is the ninth-largest Leviathan in its class and the largest passive Leviathan in Subnautica at 70 meters long but with extreme width.

Despite being the smallest Leviathan known so far, the Sea Treader still measures 20 meters in length, which is quite large.

In comparison to other creatures of its class, the Sea Treader Leviathan stands out as unique. The Sea Treader is the only member of its category who walks, rather than swims or burrows. It marches along the barren ocean floor using its two legs and elongated mouth – commonly misunderstood as a third leg. With each powerful step, the Sea Treader uproots ore from the ground for players to collect.

Shadow Leviathans have an elongated, black body with smooth skin and two rows of 37 small red spots that run from behind the head to just before the tail tip. Each row of red spots is followed by a shorter row of eight circular gill pores running down the side. There are three pairs of small black eyes on the head and a large red ring in the center, forming a shield-like structure. Due to its flexible spinal cord, the creature can contract and retract its head. A glowing blue mouth is located just behind the creature's head: it is lined with curved teeth in the shape of a ribcage without a sternum. There appears to be no throat structure in the creature's mouth. Food is passed directly into its stomach.

There are seven joint claws on the sides of the mouth. They have spines along the inside edge for securing prey. Seven more pairs are running down the body, decreasing in size as they near the tail to the point that the last three are little more than a small spine. It seems that these grasping appendages were once walking limbs on a distant bottom-dwelling ancestor, but have since been repurposed into their current form.

Several large fins on the Shadow Leviathan's body provide propulsion. While lacking a tail fluke, both dorsal and ventral sides have a large fin, with smaller fins in front and behind it. The tail has a red point.

The Sea Dragon is the second largest aggressive Leviathan and the fifth-largest one overall. With a length of 112 meters, it can handle any threat, including the player and their vehicles. The player can encounter three Sea Dragon Leviathans in Subnautica. Two of them can be found at the Inactive Lava Zone, while another one lurks in Lava Lakes.

You are going to need a prawn suit to survive the Sea Dragon's deadly bite, while you will also have to deal with its Fire Breath ability.

Subnautica's Sea Dragon Leviathan is the most dangerous aggressive Leviathan, so you should proceed with caution when dealing with it.

The Sea Emperor is the largest living Leviathan class creature in Subnautica and it has existed for approximately 26,000 years.

Sea Emperors are nearly extinct as kharaa bacteria destroyed the Sea Emperor's food source, causing almost the entire species population. Due to its immunity to the Kharaa infection, the last known Sea Emperor was captured by the Precursors for study in hope of finding a cure for it. The player can assist the Sea Emperor with hatching its eggs.

On planet 4546B, the Ventgarden Leviathan class Fauna species is a remarkable example of symbiosis. 4546B's plant life located inside Ventgarden's bell cooperates with it to survive off a thermal vent alone. Herbivores are protected from the Ventgarden's transparent bell, while the plants assist the Leviathan in absorbing various metals and gases released by the thermal vent.

As adults, Ventgardens are only seen stationary over hydrothermal vents with their tentacles anchoring them in place. Through an opening in the bottom of the body, it allows hot water enriched with nutrients to flow into the bell. When sitting over a Hydrothermal Vent, an opening is created on the underside of the body, which allows the player to swim inside the body.

Excess fluid is expelled through the Ventgarden's top vent. The excess fluid expelled can push the player 15 meters upwards.

With a height of 110 meters, the Ventgarden is the tallest passive Leviathan in the franchise and the sixth-largest in its class. The plant nursery-like Leviathan is only slightly larger than the Ghost Leviathan and is large enough for players to enter and explore.

For more information on Subnautica, make sure to check our Subnautica and Subnautica: Below Zero guides.